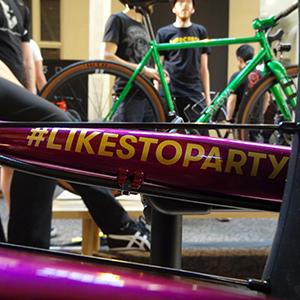 When the deadline for getting a place in the Dirty Reiver came and went without me having firm enough transport plans to be able to commit, Bespoked seemed like a nice alternative to getting my shred on in the Kielder Forest. Bespoked is something I've wanted to go to for a few years, ever since I knew that the UK had its own handmade bicycle show. Getting on the train to Bristol on the Friday morning, I had a definite sense of anticipation and excitement about what was in store for the weekend ahead.

Bespoked was everything I hoped it would be and more. At Bespoked I got to speak to some great people and admire some really stunning and unique bicycles and kit. I also got to eat some awesome cake and drink some great beer courtesy of London bike workshop-cum-cafe Look Mum No Hands! - what more could a girl want!? Overall the weekend was a nice reminder of all that is great about the cycling industry (and community) that we are lucky enough to be a part of. From left: Mercredi's 'Good Vibes Only' stand; Prova's award-winning Ripido; 'Built not bought' - one of the customer bikes on display at the Downland Cycles frambuilding courses stand

Now in its eighth year, Bespoked is the UK's answer to the US's North America Handmade Bike Show (or NAHBS). Started by framebuilder Phil Taylor in 2011, it's hard to believe that Bespoked has only being going for a handful of years. Bespoked has quickly become an established part of the cycling events calendar here in the UK, and in many people's opinions it is one of the best cycling shows Britain has to offer.

This year the show was back in Brunel's Old Station. I thought this was a particularly apt location - like Isambard Kingdom Brunel, many of the framebuilders exhibiting show a great amount of innovation and ingenuity in engineering and design in their creations. Light, airy and not overly noisy, the venue worked really well for the event. Before arriving at Bespoked I had taken a sneaky peak at who was going to be there, and was initially surprised by some of the exhibitors on the list. As well as all the framebuilders themselves, there were also several companies who supply tubing and other parts for the actual framebuilding, including Reynolds, Columbus and Bear Frame Supplies (who specialise in some seriously nice CNC-machined frame components). Although it seems obvious when you think about it, I hadn't realised that the show acted as a marketplace for business between framebuilders and their suppliers as well as between framebuilders and their potential customers.

Listed were also a good handful of some of the most 'bike-porny' components suppliers (Chris King, White Industries), wheelbuilders, custom paint companies (from specialists like Colourburn Studio to innovative DIY canned paint makers Spray.Bike) and some nice-looking tools and accessories makers too. There were also some exhibitors offering frame-building courses (more on this later). Heading down on the Friday morning, we arrived into Bristol Temple Meads station to be greeted by gorgeous sunshine and an immediate reminder of the importance of cycling in Bristol (25% of Bristolians cycle at least once a week according to research by active travel charity Sustrans). On the station forecourt were bikes stacked upon bikes, with some stands impressively accommodating three bikes a-piece.

As we were a bit too early to head right into the show, we wandered off for some lunch and enjoyed whiling away the time watching cyclists whizzing along, taking in more of the city's unique cycle culture. The demographic is not quite Copenhagen-esque, but there were a lot of people on bikes in 'normal clothes', often without helmets. Bristol has a fair few big roads enveloping and cutting through the centre, but mixed in among these there was a lot of specific infrastructure for cyclists too. We also noticed lots of the bright yellow dockless hire bikes around (these were introduced to the city by YoBike around a year ago). Entering the main hall on the Friday afternoon we were greeted by rows upon rows of stalls and stands with shiny bikes as far as the eye could see. We soon happened upon our friend Mike from Boneshaker Magazine, who had been having a bit of a 'mare as a result of a late-in-the-day printing issue with their new Boneshaker Bicycle Stories #2 book (a collection of highlights from issues 11-20 of their wonderful magazine). Luckily for them they were able to sort enough copies for the Saturday and Sunday of Bespoked, and luckily for us we were able to pick one up for the train home. The book will be available to buy soon from the Boneshaker website, and we can definitely recommend it!

We also had a good catch up with old friend Quoc Pham, who showed us his new Gran Tourer shoes, some of the swishest all-terrain cycling shoes we have come across. The two camo designs are completely proprietary, inspired by a historic army camo print from Vietnam (where Quoc was born) as well as the contours and landscape of the UK (where he now lives). The shoes have just been funded via a Kickstarter campaign and are in production at the moment.

Highlights from the weekend My highlights from the weekend included the Women's Framebuilder Initiative panel discussion, learning more about the various framebuilding courses available at the Bicycle Academy Downland Cycles and University of Iowa, the amazing beer, brownies and coffees on offer at Look Mum No Hands!, feeling a bit star-struck when I happened upon Chris King at his sweet shop counter-style stand, and having a good chat with framebuilders Mark Hester from Prova Cycles and Owen Byrne from Donard Bikes as well as others. The theme of the weekend seemed to be 3D printing, with many of the exhibitors (including Robot Bike Co, Prova, Bicycle Academy and Métier Vélo) showcasing bikes using 3D printed lugs made from titanium or steel.

In the next couple of weeks we'll be looking at some of these exhibitors in more detail, in the meantime we hope you enjoy some pics of our top picks from the show!