Break out the Jupiler, the Ronde is in Town 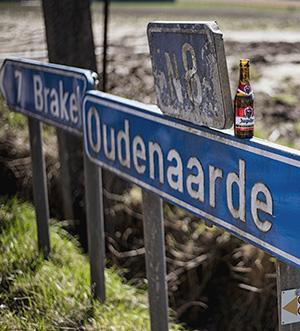 There was, a few years ago, a TV show aired on a domestic Belgian Channel. It was a show about the Ronde Van Vlaanderen - but not as a history lesson, cataloguing years and winners; the show followed the threads of numerous ordinary people's lives on this very special day. There was a corporate VIP who, through a catalogue of mishaps, missed all of the racing; a suicide case determined to end it all and a father-in-law who, looking down on the neat little villages of Flanders via the race helicopter's TV eye, was apoplectic at spotting his new son-in-law out on his sit-upon mower cutting the lawn as the race charged through the countryside: "You DO NOT cut your grass on Ronde Van Vlaanderen day!" He screamed at the images, incandescent with rage at the fate that had befallen his daughter on his watch.

The meaning of this day to the Flemish cannot be underestimated. I'd often used, as a point of reference, the analogy of the race being the equivalent of FA Cup final day here in the UK: I wince at the painfully inadequate comparison nowadays. The FA Cup does not see the country come to a virtual standstill and whole generations of families out in the streets and fields over 250km and 6 hours.

"You go round to your family home, have a nice meal together, enjoy some drinks and then all watch the race - or fall in sleep in front of the race".

I was eating dinner at a Flemish friend's house on the Friday before the race as his wife conjured up this quintessential, red-letter day family event. Think Thanks Giving to the Americans or Christmas Day to those in countries in which that is the dominant festival of family celebration. My friend, in an attempt to also convey the meaning of the race to the Flemish, found himself lost for words that he could count as truly adequate, managing only "It's... Holy..." before returning to contemplate the enormity of the event -and his glass of Kwaremont beer...

I awoke to glorious sunshine through the farmhouse's little window and temperatures that would herald the first ride of 2016 sans full length leg & arm coverings. The 'purists' can carp on as much as they like, a dry and sunny Flanders day is a joy to behold from the roadside; I'd paid my dues to 'real' Flandrian weather earlier in the week as I stood drenched in a hailstorm awaiting the twenty seconds of the Driedaagse De Panne I was to be rewarded with as it flashed by over the fabled Haaghoek cobbled section.

I set off on my ride and nodded a 'Good Morning' to a grizzled farmer, sat on his own in a deckchair on a deserted stretch of road a good three hours before the main event would pass by. I rode around the very lanes & cobbles the race was already charging towards from Brugge and soaked up the sights and sounds: The flapping woosh of windmill sails above me as their shadows cut the narrow, cement track beneath my tyres, the tractor parked in the middle-distance of a field flying the Lion of Flanders flag and giving the distinct impression it had driven itself out there to honour the race's passing and, of course, the many roadside or driveway parties that were already approaching full swing - and a fair few already way beyond that point on this 100th edition of the race - as the hands of the clock were still merely approaching midday. It was time to head to my first selected spot for the day, the iconic windmill 'Vinkenmolen' on the plateau beyond the haphazardly cobbled Molenberg; there was, afterall, a distinct risk of a race breaking out amidst the party!