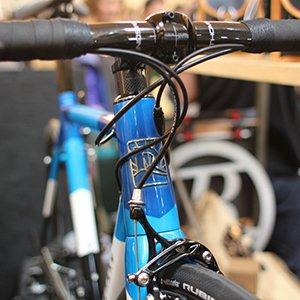 An old flax mill in County Down, Northern Ireland isn’t necessarily where you would expect to find cutting edge carbon bike frame engineering. But this picturesque setting (complete with serene mill pond and resident ducks) is where you will find Donard Bikes. Donard is Ireland’s only custom frame builder working in both carbon fibre and steel. Owen Byrne, the man behind Donard Bikes, is actually one of only a small handful of framebuilders worldwide working with both materials. The old cottage industry vibe of the location of Owen’s business matches the small-scale, hand-built nature of his creations. However, the design and build process for creating a Donard bike is anything but homespun or rustic, as we found out when we spoke to Owen.

I first came across Donard Bikes on the Bespoked website. I was getting ready for the Bespoked UK Handmade Bicycle Show in Bristol, and I was lucky enough to speak to Owen when I attended the show in April. As well as telling me about how he got into framebuilding, he also gave a fascinating insight into how you actually build a handbuilt carbon fibre frame. Read on to find out more.

Owen is a physicist who got into frame building because of his love of bicycle racing. He set up Donard Bikes after completing a couple of framebuilding courses. However, it is his Physics background that really made custom carbon frame building an option for him. Each design requires a lot of calculations. Owen's engineering industry experience and Physics PhD has given him a wealth of theoretical knowledge and practical experience to draw upon. Understanding material properties and knowing how different forces act when a bike is being ridden, Owen can customise a frame to have the exact balance of properties a customer needs. This could be stiffness, strength, forgivingness, or (most likely) a combination of the three. One of Owen's bikes on display, complete with Ritchey build kit

When a customer commissions a new bike (or frame) from Donard, Owen will work with them to design the ideal bike for their needs. After getting a feel for what they are looking for via an initial chat, Owen will invite the customer in for a bike fit and, ideally, a short ride together. If this isn't possible (for example if the customer lives too far away), Owen can use data from any standard bike fit system. He also uses customer power data, and takes into account rider style, weight and ability. Every aspect of a Donard Bikes frame is completely customised to the individual, from frame geometry to the way the carbon fibre is layered. This ensures that the finished frame fits the customer like a glove, and behaves optimally for that individual rider's needs.

The build process for a hand built carbon frame involves wrapping sheets of carbon around a mould to build up a carbon layup. Each sheet is incredibly thin and is pre-impregnated with adhesive. This is necessary because the sheets are so fine that it would not be possible to add the adhesive to them later. The sheets are carefully layered to ensure the tubes will have their required properties when the frame is completed. The joints are reinforced with extra material, and then after the layering is complete, the carbon is shrink-wrapped. This is done in a carefully controlled way to determine how much the carbon compresses. Finally Owen uses ultrasound to check the soundness and evenness of the tubes.

This framebuilding process contrasts sharply with the process used to build an off-the-peg carbon frame. These frames (which are manufactured by the thousand) are typically made up of a few pre-shaped parts stuck together. This process works well for mass production, but does not scale down to custom frame building. The costs of the complex moulds used to make the pre-shaped sections are very high, and so the approach is not practicable for a single individual custom build. Companies using this technique will be making thousands of each frame size, rather than a single frame for a specific customer. The three beautiful bikes on display on Owen's stand at Bespoked

When I say that Owen does everything in-house, I mean everything, including painting the finished frames. The signature paint scheme (which can be seen in the top image of this blog) was designed by Victory Chimp and can be created with any colour combination. Alternatively, customers can opt for a fully bespoke design, or go simple and classic with a single colour paint job and contrast branding. Owen's back catalogue includes both very modern, flashy designs (such as a marbled candy paint job) as well as more classic styles.

The finished bikes certainly stand in contrast to what I imagine when somebody says ‘carbon bike frame’ to me. Unique, eye catching and ultra-classy, and with neat finishing touches revealing the same attention to detail that Owen employs throughout the build process. Where Owen is doing a full build rather than a frameset he then builds the bike up with a groupset and finishing kit to suit the style of the bike and the customer's style of riding - these will typically have been chosen at the pre-build stage but there is generally room for changes at the bike build stage too. The majority of Owen’s customers are domestic, ranging from racers to club riders to leisure riders. A UCI Masters Race was recently won on a Donard bike, which Owen is obviously very pleased about. Owen also races his bikes regularly, pushing them really hard with the aim of testing their limits (he hasn't reached these yet!). Most of Owen's customers come to him for custom road bikes, and because he has done a lot of racing himself, this is the type of riding that is most familiar for him, but he has also made winter bikes, touring bikes and gravel bikes for customers.

Prices start at around £1,900 for a steel build and just under the £4k mark for a carbon one. Owen also offers custom paint jobs and carbon repairs when he's not building custom frames (is there anything this man cannot do!?). Thanks to Owen for taking time out to talk to us at Bespoked. If you would like to find out more about Donard Bikes or discuss a custom build with Owen why not check out his website or get in touch with him directly.