Will Travel For Gravel: Grinduro Scotland 2018 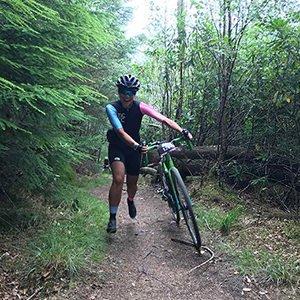 Well actually, this was my first proper gravel ride! My first time on my new bike and my first time to the Isle of Arran.

Grinduro is an event born in the California foothills amongst the downhill, enduro and MTB hype. It is essentially a challenging ride over mixed terrain (70% gravel) with four timed sections. Although a hard day out, it is suitable for a novice rider: the lack of a competitive nature and good spirits all over make the event friendly, unobstrusive and suitable for all abilities. Because it is open to all ages and abilities, the event sees pros competing against amateurs and gravel noobies like Owen and myself. There are no restrictions on bike choice, with MTB, CX and even fixed gear bikes appearing on the start line.

Now Grinduro is making its name in the UK and in particular, Arran, emphasizing the beautiful landscape, friendly locals and wilderness spirit of the island. Arran is located an hour's ferry journey from the harbour town of Ardrossan on the west coast of Scotland, a mere five hour train journey from central London. We headed up there to check it out. Left: One of the fire roads that formed part of the route. Right: Owen's Quirk Cycles bike in race mode

Friday lunchtime and riders are massing near the ferry entrance, with bike boxes, bike bags and partners all in tow! Sign on is brief, chilled and easy going as we are then told where and when to meet for our ferry crossing. This gives Owen and myself two hours to enjoy our DIY sandwiches along the harbour front, avoiding the attempts by the seagulls to pinch our roasted veg. Around 3pm the Captain of the Caledonian MacBrayne gives us the call and we ride over with our fully laden bikes ready to board the ferry.

A quick one hour journey over absoultely silky smooth waters and then we arrive in Brodick where we are given two options:

Ride four miles up over the hill towards Lamlash and Grinduro HQ;

Wait for the minibus and the bike rack trailers and get a ride.

It was an easy choice!!

Over the hill and the spectacular view of the Holy Isle (a small island jettisoned off from mainland Arran) appears, then a lovely smooth tarmac descent leads into Lamlash and Grinduro HQ. We arrived in style on our brand new Quirk Cycles adventure bikes, bags packed and strapped to the frame, smiling faces and hungry stomachs. We went straight to the camp site and got cracking with the tent, trying to beat the infamous clouds of midges which were starting to emerge. First day pretty much done, a few minor bike checks and then a good feed before settling down for the night. A socially acceptable mass start time of 9.30am meant a nice relaxing morning eating breakfast amongst the other riders. Steaming bowls of Scottish oats, freshly prepared flat whites and blueberry pancakes was the menu. And very good it was indeed!!

For me Grinduro was about fun. It's made up of four timed sections, two descents and two climbs. But having been racing roadie Crits once a week since early June, I wasn't in it for racing today. So with that in mind, we were slow to leave and almost ended up starting as the last group.

The first section involved rolling along the Lamlash coast line, taking in the views and getting to grips with our new bikes. The atmosphere throughout the day was really positive, with people more than happy to chat away and discuss the various terrain on offer. Around eight miles in we reached the first rest stop via a short climb and then descent through what looked like an old quarry (plum size rocks). Set in the stunning grounds of Brodick Castle, it had a fine selection of nibbles and treats, most of them locally produced: After a quick feed and stroll about, we hopped back on and enjoyed the tarmac road along the coast as we traversed to the north east side of Arran. From there we cut back on ourselves and went straight into the second timed section. A 4km climb upwards on gravel, dirt roads (apricot size pebbles). Fortunately, the terrain was very dry, with little to no water or mud anywhere. The arid, dry, sandy conditions did mean that grip wasn't the best, so tyre pressure was always a question. I started on 40psi in both tyres and gradually let out a bit here and there - again, I've no experience of gravel riding and very little of CX riding so I was guessing the whole way.

After that switch back we started heading south back towards Grinduro HQ for a proper lunch stop. As we were only 21 miles into a 51 mile route, I tried not to overeat but it was easier said than done: the excellent catering team were serving meat and vegan options and we didn't let the chance for a good feeding pass us by!

After Owen had eaten approximately his arm's weight in vegetable pasta and flapjacks we left HQ for the second half. Having had over an hour of jumping around on beanbags and chatting to everyone and anyone at HQ, we were towards the last end of the groups to leave again. We hit the tarmac for a few miles before the route changed to gravel single track. At mile 27 we started the third timed stage - the longest section of the day and a climbing one right after lunch! The stage was a rolling fire road, which was awesome for having a little smash up! There was loads of room to overtake and choose your line, and the terrain (strawberry sized pebbles) was easier to read than a twisted single track. This meant you could put in an effort and still look around at the beautiful landscape the free road was traversing.

Section complete, legs burning and somehow hungry again we found ourselves on a very welcome smooth tarmac road. Starting at Pladda Isle and ending at the Velo Café in Lagg, this six mile stretch took us along the southern edge of the island.

We've been to countless cycling cafes and love the unique coffee and cycling culture each one brings, but Velo Café is one to revisit; it's run by a pair of cycling enthusiasts for cycling enthusiasts, the place is full of laughter and all types of cycling memorabilia. If you visit the island be sure to make this café a food stop. We ate flapjacks and cakes and drank our coffees whilst watching the last 20k of Stage 8 of the TDF. After definitely not over eating or over caffeinating, we doubled back on ourselves to finish the last part of the route... Fiona and Owen outside Velo Café, a 'must-do' Arran experience for cyclists

A mix of forest road and single track led us back up and across the island towards Whitling Bay. This track was by far my favourite: the views were just incredible and the terrain was super-testing at times. Some parts I had to step off my bike for fear of launching myself over a cliff edge (watermelon sized rocks). Watching the more experienced MTB'ers shred it down the tracks and rocky switchbacks was really entertaining.

As we approached the final timed segment we cut through a coniferous plantation with fallen branches and roots covering the floor. Choosing your route through was a puzzle: you either nailed it and snaked through the trees under dappled light like Owen, or you didn't nail it like me - I ended up catching my front wheel at an angle and flipping over the bars, damn!... Check the bike, get up, check the bike, check yourself and check the bike again. All good! Lets roll.

The final section is a single track descent which was seriously uncomfortable if you had no suspension, the ground was solid dry with occasional random rocks (mango sized ones) and sections of loose sand, this was classed as a descent but felt like it was equal parts climbing. The solid uneven ground was hard to relax on but easy to pick up speed on.

Passing through the final timing gate it was all soft pedalling to HQ - until we saw the finish line, where we couldn't not do a sprint finish! Owen gives me a couple seconds' head start and I'm already laughing, this is always the best way to finish an epic ride on tired legs, but most importantly I won.