Magnic Light: A magnetic bicycle dynamo light that will blow your mind 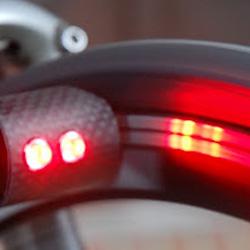 Batteries are undoubtedly one of man's most wasteful inventions. Expensive in cost and resources, they are not only quick to drain, but destroying them environmentally is nigh on impossible. However, a new development by German innovator Dirk Strothmann called the Magnic Light could be the great leap forward the cycling industry had been waiting for, and one which could consign the ungainly battery to the bin of history and unleash the dream of frictionless self powered cycling lights!

A true contactless dynamo bicycle light, Magnic Light affixes to the brake caliper, and uses the wheel rim (it appears to work with aluminum, steel or magnesium rims) and internal magnet within the dynamo to generate eddy currents which generate their own magnetic fields. The eddy currents are then picked up by the Magnic Light itself to product electrical energy to power the onboard highly efficient LEDs.

Whilst there is small braking effect from the magnet, as you can see in the video above, the wheel is not unduly restricted and appears to roll freely for quite some time.

We wish Dirk all the best with his invention, and hope to see it on a bike near us soon!

Riders interested in the progress of the Magnic Light can view the home page here.