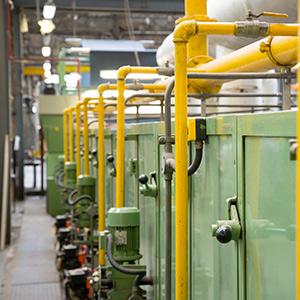 The car escapes Edinburgh via the huge spans of the Forth Bridge and heads towards the foothills of the Highlands. We are driving to Dundee through the beautiful, rugged terrain of Scotland's east coast. It is these mountains and the unforgiving North Sea that call the tune in these parts as far as the weather goes, thus it is no surprise that the region is home to the world leader in the manufacturing of performance waxed cottons, Halley Stevensons.

I’ve been dispatched to Dundee by Always Riding, together with photographer Andrew to seek out the source of some of their favourite retail lines, namely Carradice's saddlebags and Brompton luggage. As it happens, Always Riding are big fans of high-quality waxed cotton (no-one said they were normal!), and committed converts to its waterproofness, durability and aesthetic. With the mention of seeing true craftsmen at work, plus a plane ride to boot, I was sold on the mission.

We arrive at Halley Stevensons' Baltic Works and meet with Managing Director, Jimmy Campbell. Waxed cotton is enjoying a renaissance, not only due to the superb weatherproof properties of this versatile material but also as a result of the growing awareness of the environmental issues associated with the environmentally harmful coatings used on many man-made fabrics to achieve protection against the elements. The high-fashion and performance-wear industry are now seemingly realising they'd perhaps thrown the baby out with the bathwater in the 1980s rush towards man-made fabrics and coatings in their search for the technical materials of choice.

Jimmy sees the waxed cotton resurgence as a timely "…return to things that worked over a hundred years ago and were built to last" and sets his stall out further by informing us that "You may have developed the notion that waxed cotton is a lesser performing 'technical fabric' to man-made ones: It is not! We do not need to reinvent the wheel here. Everything we do is about heritage." That this heritage supplies a versatile, sustainable and biodegradable option for those who demand the highest in performance wear and luggage on the bike is not lost on Always Riding.

At Halley Stevensons, the heritage trail begins in 1864 when Francis Stevenson founded a cotton jute mill on the site of the very factory in which we are stood (the tale is told on the shop-floor that the ornate, listed structural girders are wrought from the very iron of the tragically ill-fated Tay Bridge itself). The material produced fed, in no small part, the huge shipbuilding industry along the east coast as it was used as a lighter, equally dense alternative to flax, the traditional but very heavy sail-making material. Indeed, the Baltic Sea trading routes over which the Clipper ships, upon which the sails were hoisted & plied their trade gave name to the factory.

It wasn't long before a key development, born of pragmatism, emerged. The new material, salvaged from worn sails by the seafarers, started finding its way into their garments. If there is a finer accolade or harsher testing ground for such properties as the Halley Stevensons product embodies then I'm struggling to think of it! Wartime brought yet further research & development in conjunction with the military, accompanying their huge demand for waterproof canvas and cotton to supply clothing for the troops and items such as the covering for troop carriers, which Halley Stevensons' super-heavyweight 24oZ material provided.

You may have developed the notion that waxed cotton is a lesser performing 'technical fabric' to man-made ones: It is not!

Jetting forward to the late 70s, Halley Stevensons become heavily involved in the commercial waxing of cotton when England Rugby Captain, Bill Beaumont, approached the company in his search for a supplier for his own Chorley-based apparel company. The opportunity was not to be missed and, during the waxed cotton heyday of the 80s, the Baltic Works was running flat out, 24 hours a day on three shifts: "You just couldn't produce enough of the stuff!" Jimmy recalls "It was just crazy!"

The days of astronomic mass production may now be consigned to a past era but the company has retained its revered place in the market through keen business acumen and the ability to move with the times. Listening to the specific needs of high end clients, along with a huge focus on innovation and development, are now at the core of the operation. Jimmy expounds "Every season, that's twice a year in the garment industry, we develop between fifteen and twenty fabrics". Aesthetics and performance are the areas Jimmy and his team focus upon. "The actual core fabrics are tried and tested. We stick with what we know works and then enhance it. We have now diversified into smaller batches and many colours. It's about agility in the market place."

The clients Halley Stevensons supply are many and varied; the company's materials routinely grace the catwalks of Milan, Paris, London & New York under the guise of some of the biggest fashion houses on the planet and make up probably the most iconic jackets of the modern era. At the other end of the scale, Halley Stevensons work with young designers and new companies from around the world who are pushing the boundaries in the quest for performance and aesthetic.

Jimmy picks up the tale of one such local designer who came to Halley Stevensons with a request that tapped directly into the previously mentioned heritage of the wartime research years. "During World War II, the Nazis placed an embargo on linen entering Switzerland. So, the Swiss army started weaving yarns with nettles out of necessity. We looked into this material at the request of the client who had an interest in working with it and worked out the composition and processes involved. It's as close a replica as you can get to that material, a material that was born out of desperate times which had to work. We wanted to re-capture that heritage and understand that product."

..the Swiss army started weaving yarns with nettles out of necessity. We looked into this material at the request of the client who had an interest in working with it.

This ability and know-how comes from the huge experience Halley Stevensons have within their workforce. Jimmy, himself a lifelong textiles man who graduated with a Degree in chemistry and textiles technology, worked his way up from the shop floor. He spent years building up his understanding of the processes and moving up through the ranks, something he sees as vital to his role now "Dyeing is a science: It's all about timing and temperature - you control those, you will consistently produce a high quality product, time and time again. The finishing is a different matter. That's an art in itself. You need the skills and appreciation of fabric, the knowledge of what different finishes will bring to a fabric". Jimmy points to the Dye House Manager who started with the company aged sixteen and is "...now - well, I need to be careful here - in his sixties, shall we say!"

It’s the end of our time with Halley Stevensons and I collect my coat and bag from the boardroom. We had started in there by looking at the many different examples of products and fabrics before hitting the research labs and then the heart of the operation, the bustling factory shopfloor. As a demonstration, Jimmy had poured a glass of water over one of the examples, the stream of water immediately dispersing upon coming into contact with the fabric. Droplets randomly formed, splashing like diamonds across the weave, almost as if the impenetrable surface had left the element confused by its lack of power against the new foe. Those beads of water were still there as I collected my belongings hours later.