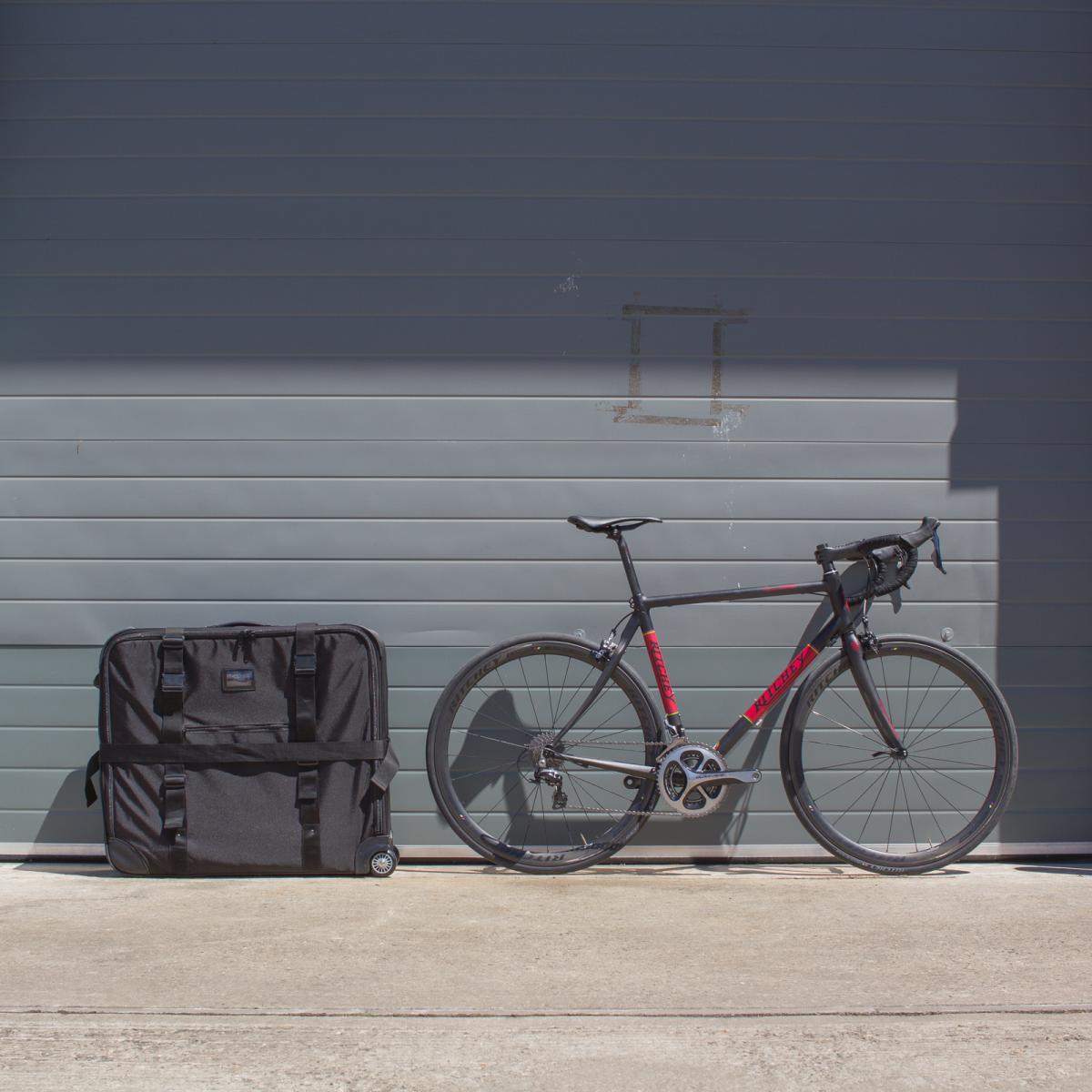 Ritchey has a range of framesets with the Break-Away tag, including a carbon Outback, carbon Road Logic, steel Road Logic, steel Swiss Cross Canti as well as an elusive Tandem. Ever since we started selling Ritchey, we have always wanted to get a closer look at these slightly left-of-centre travel machines – so we did just that, borrowing a tricked out Break-Away Carbon Road from Ritchey themselves. This much dismantling is normally saved for special occasions. You may find yourself making up excuses just to practice taking your bike apart.

The Break-Away system allows you split your frame in half and pack your entire bike into a suitcase to travel with it. The principle of it sounds a bit space-age and almost gimmicky, but Ritchey have really thought about the design and practicalities of what is needed to make it work. The key parts for this are the frame itself, the downtube coupler, seatpost clamp, cable breaks, the travel case and padding – all of which is included when you purchase a frame.

Simplistically, the frame comes away in two parts, which are held together by a double bolt seat post clamp and a downtube coupler. After the wheels, pedals, seat post and handlebars have been removed, everything fits into the padded case that measures 22 cm x 68 cm x 79 cm with space for your shoes and spares too. At that size, most airlines take the case on as standard hold luggage, minimizing the chance of pesky oversized baggage and sports equipment fees.

Riding your bike in different places is a really enjoyable part of the sport, but anyone who has done it knows that it often isn’t as straight forward as you think. All of the Break-Away frames are meant to be your one road, cross or gravel bike – not just a bike for travel. The weight penalty is 100 grams, which is barely enough to sniff at. Flying is just one way to travel

There is no denying that the system was developed with jet setters in mind - the wheelie suitcase should be give away enough for that. The benefits for flying with a bike like this are numerous – only paying standard hold luggage fees, straightforward to pack and unpack, public transport compatible, and space for spares to name a few. All of the usual hassle of flying with a bike is reduced as you have a case and padding always ready to use.

We think this system has a wider reach than just the frequent flyer. Any form of transport can benefit from having a square shaped bag, whether it is a car, coach or even train. Even travelling by car, coach and train is easier with the purpose-built and square bag. Most of us don’t have the luxury of a van, so being able to easily travel on all forms of public transport opens up riding destinations –anything that enables you to ride more is good in our books. Even a speedy boarding pass and a big duty-free bag isn’t going to get your Break-Away on as cabin luggage, but we like your thinking.

Danny took the Carbon Road Break-Away on some of the shallower hills around our warehouse to see what the bike was like out on the road. As far as he could tell, it was as good as, if not better, than his personal steel Road Logic.

“The initial hesitation of riding a bike that designed to fold in two quickly went away. The bike feels as good as any other top end road frame and is seriously light.” (This was helped by the frame being built up with a generous smattering of Ritchey carbon fibre and Dura Ace.)

Several photos and bit more riding later, the short and sweet time on the bike left a voluptuous taste in the mouth – the promise of being a premium quality bike that can be packed away really did hold up.

Less time than making a round of coffee

You are right in thinking that it is more effort to pack your bike into a suitcase than it is to load it into the back of a van, but the speed at which you can pack your bike away is surprising, especially once you get good at it. Whilst the Break-Away Road was in the office, it was built and unbuilt it about a dozen times to make sure everyone really understood the ins and outs, trying to find the best and most logical ways of building and packing the bike.

Pascal, Anne, Danny and Denise all timed themselves on how fast they could unbuild and pack the Break-Away (away?). All of us have varying levels of mechanic experience, just to prove that everyone is up to the task of doing it and that it doesn’t take an unreasonable length of time. The two rules were: 1. You had to treat it like the bike was your own (you wouldn’t throw your own bike in a bag with no padding, right?) and 2. You had to pack it as if you were in a hotel room (using multi tools and without a bike stand). Sounds simple right? The times were as follows:

In all fairness to everyone else, Pascal was the only one to not pack it blind. Despite winning, we all think he should have done better considering he had done it several times already. All in, going from ready to ride to ready to fly in under 20 minutes is good going. So, Ritchey Break-Away: incredible bikes that can you can ride all over the world.

How fast can Tom Ritchey build one of these?

So fast that by the time we’d gone to make a cup of tea, he had enough time to get changed and head to his office.

The tandem is proving tricky and no one here can wheelie.

How many pairs of shoes can I fit inside the case?

Three or four maybe, with the bike already in there. You might benefit from a clear out if you can fill the bag without a bike in it.

Does putting a picture of a TV on the side of the case prevent airline damage?

Cardboard is the usual protective attire chosen for TV transport. We're not sure the airline baggage handlers will be fooled.

Where can I buy one of these?

From your friendly neighbourhood Always Riding (see below...).